A good name is more precious than fine oil.
(Ecclesiastes 7:1) 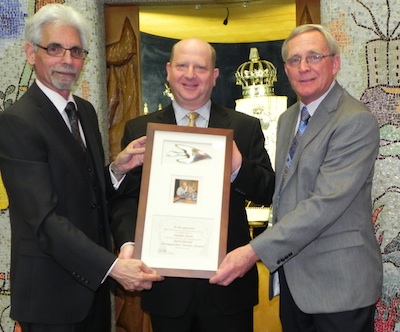 Stephen Eisen was presented with the Ruth Sherrill Distinguished Service Award, for his leadership and contributions to Temple life.  Stephen is only the second recipient of the award, the first having been Ruth Sherrill herself at the time that the award was established by the Board of Directors in January, 2011. The award is not expected to be made annually or on any particular schedule, but rather when, in the opinion of the Temple’s Executive Committee, an individual has distinguished him or herself by extraordinary service.  In conferring the award, President Stu Elston recognized Stephen’s many years of service and dedication . . . given our congregation by serving on its board and as its president, and in particular by leading us through a critical transition in our Temple’s life and, in addition, ensuring a chain of leadership into the future by enlisting and inspiring many talented members to commit to serve our congregation on its board and as future presidents.”